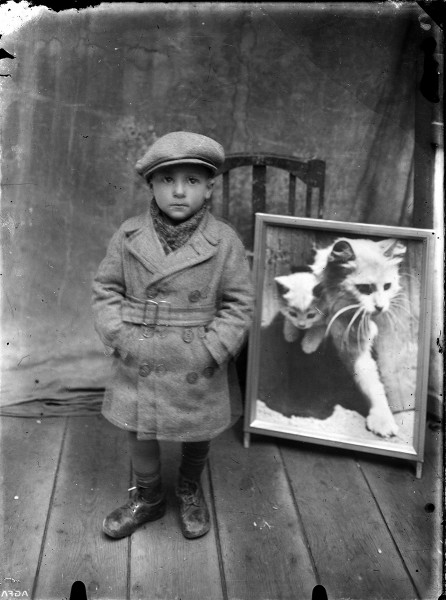 The little boy’s cap and coat are brand new. His shoes, however, are scuffed. He has been a little boy in them for some time and taken little-boy dominion. On scuffed floorboards his feet aren’t arrayed in proper new-clothes symmetry, but the cap and the coat are constraining his upper body to their form. Made in a factory, they still incorporate some of the factory’s architecture.

No wonder the little boy is unsmiling. The transaction that has covered him with new cloth may have been love, but he can’t yet feel it on his skin. During the instant when his photograph was taken, he was still in the factory, not yet home.

However, Costică Acsinte, photographer of humanity in the guises of its clothing, understood the problem and devised a fix. Into his image of a body restrained by buttons and buckles he inserted a second image, this one not of one body isolated but of two bodies touching. Merged into single fur, a lithe enclosing integument unites the two bodies in one. Placed then under Acsinte’s control behind the little boy, the undoubled image takes on the intelligible function of an index of love. It mirrors the giver of the clothing to him- or herself as a body wearing that which has grown out from itself to make contact with another body.

And we are now admitted to the room where a body in a picture grew toward another body and a giver of covering for the body was helped to see.