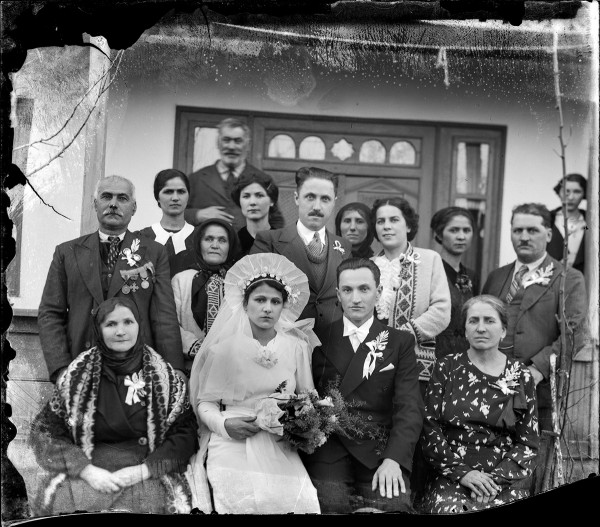 “You’re what!” said Mother when I told her the news.

“Six weeks”, she said “Six weeks. And I suppose you know who the father is?”.

“The drummer in the jazz band. His name is Simion Torje” I said by way of explanation.

“Simion Torje. Simion Torje. A layabout. A scoundrel. A good for nothing like his father, and grandfather and great-grandfather before him. And my daughter Magda Stoica has to fall for him”, said Mother dancing around the room.

Father emerged from his afternoon snooze and asked what was going on.

“Your daughter fell for a drummer in a jazz band and now you’re going to be a grandfather”, replied my mother exasperated.

Father seemed bewildered and could only croak a lamentable “Eh”.

“Well this is not on. This is not on at all”, said Mother. “Put your coat on Magda and follow me”.

I did what I was told and for once in my life didn’t question my Mothers authority.

We stomped through the town weaving in and out of the back streets and side lanes. My Mother not saying a word ignored all her cronies who wanted to stop for a Sunday chat. I’ll say one thing about Mother when she gets the bit between her teeth she’s pretty determined.

Eventually we found ourselves outside the Torje family home. My Mother gave their front door three short, sharp knocks. Rather slowly Mrs. Torje, Simion’s Mother opened the door. Before she could say “Hello”, Mother cut her dead. “We have a problem”, she said sharply.

We were ushered in to the kitchen and the two Mothers whispered in the corner. A few minutes later Simion walked in the front door and knew immediately what was wrong.

“Well is it true?” asked Mrs. Torje. Simion looked at the ground and nodded his head.

Without saying a word Simion sat down and smiled rather sadly at me. I in turn regarded him with contempt. We sat listening while the two older women conducted whispered negotiations. I could hear words like “Honour”, “Scandal”, ”Time”, and ”Date”. Finally discussions concluded and the two women turned to us and said told us to follow them.

Once again we wound our way though the town. This time our destination was Father Lupescu’s parochial house. Mother knocked on the door and it was Father Lupescu himself who let us in. My Mother explained to the good priest that they had a delicate matter they wished to discuss with him.

The two women and Father Lupescu went into his back room while Simion and I remained in the hallway. Simion asked me how I was feeling and I told him I felt fine. But in truth I didn’t. I had an inkling what was taking place and wasn’t really looking forward to the prospect.

Half an hour later the two women emerged. Both seemed relieved. Father Lupescu in contrast regarded us scornfully.

“In two weeks time you are to be man and wife” he said reproachfully, “Let this be an end to your sinful ways”.

A stipend was promised to the church and both women swore they would offer up prayers to the most venerable saints in heaven in praise of the wise and merciful Father Lupescu.

Two weeks later the wedding ceremony went off to perfection. Father gave his medals from the war an airing and proceeded to bore everyone with his tales of bravery and courage. Mother was angelic and floated like a butterfly among the assembled guests. Simion of course loved the fact that he was the centre of attention. As for me, well I seemed to be the only one who didn’t want to be there.

In the midst of all the festivities we are all called together for one last photo. “Smile”, says the photographer. To hell with him and everyone else. No I won’t smile, I won’t. My life is over, but if my husband ever plays in a jazz band again, so is his.